October 25 is celebrated all over the country as Pit Bull Awareness Day. Why does this breed in particular need an awareness day? You probably already know the answer to that is they are widely discriminated against. We urge you to NOT believe the bull, and help animal welfare advocates everywhere educate people about these wonderful dogs. 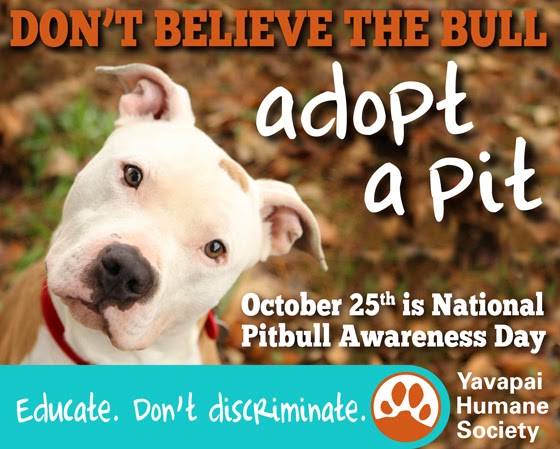 ASPCA CEO Matthew Bershadker recently joined us in this plea. Bershadker is a 12-year veteran at the ASPCA where he also served as vice-president responsible for programs that confront animal cruelty and suffering across the country.
Bershadker states, “any prejudice against the pit-bull makes no practical sense. This isn’t a rhetorical debate; the lives of millions of animals are at stake. It’s important to identify what we know about this maligned and often misidentified breed.
We know every dog is different. That’s what makes each unique, special and beloved by its human family. We also know dogs’ personalities aren’t based on any single influence any more than ours are. A dog’s behavior is a function of breeding, socialization, training, environment, and how it’s treated by the owner.
Historically, bulldogs, the forbearers of the modern pit-bull, were pitted against bulls, bears and other large animals. When these fights were banned in the 1800s, people turned to fighting dogs against each other. Pit-bulls were never bred to be aggressive toward people because fighting dogs must tolerate frequent handling by the humans who fight them.
Pit-bulls have long been popular family pets, noted for their affection and loyalty, but you don’t hear much about gentle, loving pit-bulls in the media because a well-behaved dog doesn’t make headlines.
There are many factors that contribute to behavior development, even between dogs of the same breed. A pit-bull bred for generations to fight may not fight, while a golden retriever bred for generations as a service dog may bite.
There are measures owners can take to prevent or curb aggressive dog behavior. For example, if you chain any dog outside, and isolate it from humans, you increase the risk it will develop aggressive behavior. Early, positive behavioral conditioning and socialization is the best way to reduce aggressive tendencies in dogs.
Puppies that learn to interact and play with people and other dogs are less likely to show aggression as adults. No matter the breed or background, every dog needs to be raised responsibly, including early socialization, proper training and supervision.
Ask pit-bull owners about their pets, and you’ll hear the same glowing praise you’d expect from the proud owners of beagles, retrievers, pugs, or Labradors.

Not every dog is a good match for every person, so educate yourself before adopting.

Compare a dog’s need for exercise with your availability to take it on frequent walks. Compare its medical requirements to your ability to provide that care. Compare its behavior, as explained by shelter staff, with your family’s ability to manage that behavior. When taking in a new pet, ask questions, consider potential challenges and remember small children should never be left unsupervised around animals.

Understanding dog behavior, providing the care they need and the supervision expected by family and neighbors are the best ways to keep pets and people safe, to celebrate the joy pets bring into our lives, and to end the myths that unfairly and tragically cost so many their lives.”

If you’d like more information on Pit Bulls, click on the following links:
Pit Bull Awareness Coalition
ASPCA
Beyond the Myth